Thank you for your ongoing prayers for Sudan, following the military coup in October. In a further development, Prime Minister Abdalla Hamdok has tended his resignation following mass protests in the capital Khartoum. He had been reinstated in the position having initially been put under house arrest. Sadly, hopes that this would be a turning point in the crisis have now been dashed. Here we have the latest on the unfolding situation, and how you can pray.

Your continued prayers are needed for Christians in Sudan following the resignation of Prime Minister Abdalla Hamdok.

Abdalla Hamdok was put under house arrest when the military launched a coup in October 2021. Following protests, the military reinstated him as Prime Minister under a new power-sharing agreement. However, protestors feel the agreement gives too much power to the army and have demanded a return to full civilian rule. It's led to mass protests which have prompted the military to react with force, leaving at least two people dead. The growing impasse has resulted in Abdalla Hamdok's resignation.

According to the BBC, the country is in a perilous situation. Power is again firmly held in the hands of the military, who had hoped the reinstatement of Abdalla Hamdok as Prime Minister would appease the protestors.

There are fears Sudan will return to the authoritarian years of ousted leader Omar al-Bashir. This could undo the positive steps made towards religious freedom under the transitional government.

Please join our brothers and sisters in Sudan in prayer for a peaceful transition to civilian, democratic rule that leaves room for them to live freely as Christians.

In positive news, Abdalla Hamdok has been reinstated as Prime Minister of Sudan. He appeared on TV signing a new power-sharing agreement with coup leader Gen Abdel Fattah al-Burhan.

However, according to the BBC, the civilian coalition that nominated Hamdok as Prime Minister two years ago have refused to acknowledge any new deal.

The Prime Minister will lead an interim cabinet until elections are held. But given that this will come under the authority of the military, it’s unclear how much power the cabinet will have.

Praise God for this encouraging development. Please pray that this will lead to further steps that will restore the progress made under the transitional government.

Christians in Sudan face struggle for survival, one week after military coup

Many Christians in Sudan are facing a struggle for survival, one week on from the military’s seizure of power.

“The general life of most Christians has been greatly effected by the events,” a source told Open Doors. “As no normal activities have resumed, the situation is becoming desperate for Christians who mostly depend upon daily hard work to earn an income for their families.”

“The church in Sudan needs prayer from the global body of Christ. We started praying on daily basis for Sudan, believing that God controls the hearts of kings as streams of water. He will make a way whether is seem to be no way. He will bring a breakthrough.”

Meanwhile, in further worrying developments, the military have attempted to release from prison several allies of former President Omar al-Bashir.

On Monday (1 November), Ibrahim Ghandour – who is leader of the disbanded National Congress Party – was released. Thankfully, the Sudanese authorities later rearrested him. Ghandour had previously been detained under orders of a taskforce intended to dismantle and prevent the return of Bashir's three-decade rule, which ended in 2019, explains Middle East Eye.

Several other Islamist Bashir allies were also released, including two former intelligence officials, but it’s unclear whether they have also been rearrested.

Sudan's Information Ministry, which is loyal to ousted Prime Minister Abdallah Hamdok, said that the release of the Sudanese Islamists ‘clearly reveals the political cover of the coup and its true ideological orientations’. They said the releases ‘represent a setback against the state of institutions and the rule of law’.

In the meantime, the UN Special Representative for Sudan, Volker Perthes, said on Monday (1 November) that several mediation efforts are underway to solve the current political crisis and restore constitutional order in Sudan. Perthes said the situation is ‘stable but very tense’.

On Saturday, tens of thousands of people peacefully took to the streets in protest against the coup. Since last Monday, at least 17 people have been killed in clashes with the military.

Heavenly Father, provide for the physical, spiritual and emotional needs of all our brothers and sisters in Sudan. Bring peace and stability to this nation. May Your favour be on attempts to mediate with the military. Soften the hearts of those who have seized power. Shift their perspectives to show them a better way. Protect, strengthen and encourage Your people, and may they shine brightly for You during this deeply unsettling time. Amen.

Christians in Sudan are facing renewed fear and uncertainty after the military – who had been sharing power with civilian leaders under the country's transitional government – launched a coup.

On Monday (25 October), several civilian leaders were put under house arrest, including Prime Minister Abdallah Hamdok. Civilian rule has been dissolved and a state of emergency has been declared. General Abdel Fattah al-Burhan, leader of the takeover, said the civilian government was ousted to prevent a civil war. He has promised to hold elections in June 2023 and hand over to an elected civilian government then. 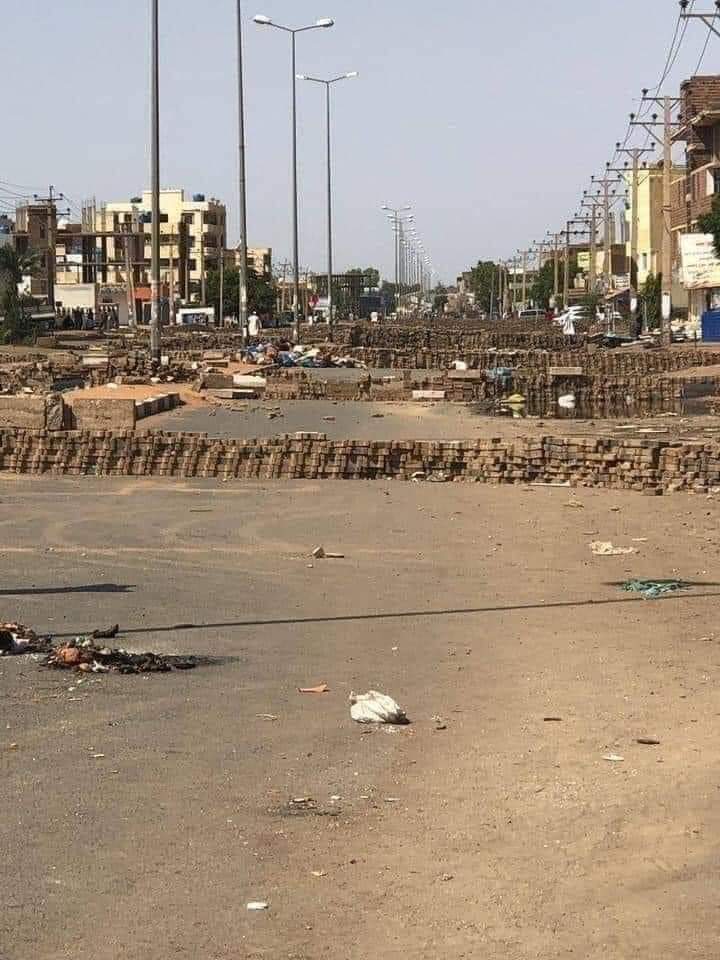 In September, the military failed in an attempted coup; however, it stoked divisions between conservative Islamists who want a military government, and those who toppled Omar al Bashir in April 2019. These growing tensions led to the coup.

The country has ground to a halt, especially the capital Khartoum. Markets have closed and many Sundanese people have refused to work, including doctors except to treat critically ill patients. Mobile phone coverage has been cut off in parts of the country. Church activities have been disrupted.

A Christian source in the country, who cannot be named for security reasons, explains what the image (right): "This is the way the civilian people close the street in the face of the military, so that they can keep them out of the neighbourhoods. They think if the way is open then a lot of blood will be shed, and many people will be killed."

The military's actions have drawn international condemnation. "We call on all actors who are disrupting Sudan's transition to stand down, and allow the civilian-led transitional government to continue its important work to achieve the goals of the revolution," said the US embassy in Khartoum. Vicky Ford MP, who is Minister for Africa, called the coup 'an unacceptable betrayal of the Sudanese people and their democratic transition'.

What positive steps have been taken towards religious freedom in recent years?

Since the overthrow of Omar al Bashir over two years ago, the transitional government has taken several significant steps towards religious freedom.

After 30 years, Sudan is now a secular state and no longer under Islamic rule. The death penalty for leaving Islam has also been abolished, and last year, Sudanese Christian and Muslim leaders signed a declaration to work together on promoting religious freedom. This progress led to Sudan dropping six places to number 13 in the latest World Watch List.

There is now fear that these positive developments – which have irked al-Bashir allies and other hardline Islamists – will be undone with the military in total control of the country.

How could the coup affect Christians?

“[The coup] is going to strike fear into the heart of Sudan’s Christian population and remind them of the terrible persecution they have faced in the past,” says Illia Djadi, Open Doors’ senior analyst on freedom of religion in sub-Saharan Africa.

A Christian in Sudan shares his insights into the unfolding situation

“This coup plunges the country into a new period of uncertainty. We fear that a government controlled by the military will roll back all these constitutional changes, including guarantees of religious freedom. This is going to be terrifying news for Christians after a hopeful couple of years.”

“The news is very disturbing,” adds Yasin A, Open Doors’ Director for East Africa. “We call on Christians around the world to join us in praying for Sudan at this time. The country has come a long way since former dictator Omar al Bashir’s rule was ended. The risk of a military takeover will be a step backwards with potentially grave consequences for the church.”

Please pray for our Sudanese family

Sudanese society remains dominated by conservative Islam, so despite the positive strides made in recent years, Christians continue to face persecution.

In July this year, a Christian advisor to Sudan's religious affairs minister was attacked because of his support for the country's Christian community. In May, a church building, being rebuilt after it was destroyed by arson last year, was demolished again after threats by local villagers and authorities. Three months earlier, a Christian youth leader was arrested and interrogated by security officials who warned him not to start a new church as Christianity was 'evil'.

Christians from Muslim backgrounds are especially vulnerable to extreme persecution. They could face attack, ostracism or discrimination from their families and communities, which is why many choose to keep their faith secret.

Despite these ongoing pressures and incidents, Christians in the country have been encouraged by the progress made under the transitional government. It's brought hope of a brighter future. Sadly, recent events now threaten to dash this. Please pray that the positive developments made will not only remain, but be built upon.

"Please continue praying for us to see intervention in this situation," the source in Sudan asks. "We need really to see God’s hand in this issue. It is really very tough. It's really a very tough situation. Even though it is calm, nobody knows what will happen next. So just pray for us." 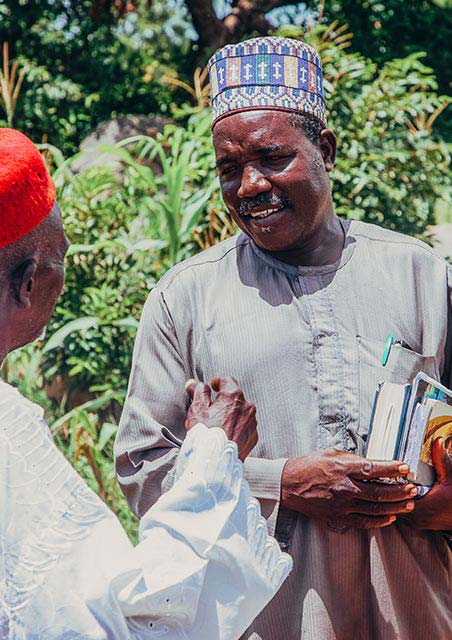