Life in exile in North Korea: Will you show Bae she isn't alone?

Bae was sentenced to a lifetime of backbreaking labour and starvation rations - just for having a Bible. Here's her story - and the one time she managed to escape.

If you were to see Bae* during the day, you’d assume that her work was picking crops.

Every morning in the village she’s forced to live in, Bae spends the day working in the fields. She has to meet her work quota of crops. If she has any time for a short break, she heads for the woods. The mushrooms and plants she forages help stem the gaping hunger in her belly – otherwise she only gets to eat meagre rations. Like everyone else in her village, Bae is close to starving. The authorities give them just enough to stay alive. It’s partly a punishment, and partly a reflection of the terrible food shortage in North Korea.

If you saw all this, you’d be appalled. But you’d have no idea this isn’t Bae’s real work.

"Man does not live on bread alone, but on every word that comes from the mouth of God" Matthew 4:4, Bae's favourite verse

That starts at night. When she and her housemates cover the windows with blankets, light a small candle and sit in a tight circle. Bae gets out a book.

“Man does not live on bread alone, but on every word that comes from the mouth of God,” she reads.

This is Bae’s real work. This is the North Korean underground church.

Exiled for owning a Bible

Bae hasn’t always lived in this village. She and her husband were sent there when the authorities discovered that they owned a Bible. Simply for that, they were sentenced to a lifetime of hardship and backbreaking labour in this remote village, always on the brink of starvation.

EVERY £56
could give discipleship training to 14 believers from a country where Christians face extreme persecution.
my gift today

It’s almost unimaginably hard but, believe it or not, Bae is one of the ‘lucky’ ones – because she wasn’t killed. That’s what happens to most North Korean believers if their Christian faith is discovered. Open Doors estimates there are around 400,000 Christians in North Korea, but they all have to completely hide their faith.

There is absolutely no freedom of religion or belief for any faith. The authorities decide everything about the lives of North Koreans. Where they live, what they do, even what they think.

The most extreme persecution

North Korea certainly isn’t the only country where following Jesus exposes Christians to terrible opposition and violence.  For example, it has a lot in common with Afghanistan – where Christians also face some of the most extreme persecution in the world, and which has been in the news so much in the past six months. Despotic leadership. Human rights abuses. Persecution of minorities. Humanitarian crisis. From Iran to Nigeria, Somalia to Saudi Arabia, many Christians around the world know they could be imprisoned, tortured or even killed if their sfaith is discovered.

In comparison, it might seem like Bae received a light sentence. She is grateful to be alive, but her punishment is much harsher than it sounds. The region she’s been sent to is more like a prison than a farm. The roads out are closely monitored and guarded.

Unbelievably, Bae did once manage to escape.

Shelter at a safe house

When North Koreans flee the country, they often go across the Yalu River into China. This is far from a simple journey, and it has become much harder during the pandemic – with security intensifying even further at the country’s borders. Once in China, North Koreans risk being found by security forces and sent back to North Korea to face interrogation and imprisonment. But it’s a risk that many North Koreans take – including Christians. When Bae arrived in China, she was able to find shelter at a safe house. It’s run by Open Doors secret fieldworkers, thanks to your gifts and prayers.

"We were overwhelmed when we received this food" North Korean Christian

Brother John* is an Open Doors fieldworker whose ministry at a safe house involves supporting North Koreans like Bae with food, medicine and fellowship. Food aid is particularly vital, as even North Koreans who aren’t exiled like Bae face extreme shortages – and North Korea is on the precipice of another famine like the one that gripped the country in the 1990s.

“We were overwhelmed when we received this food,” one message from the North Korean believers says. “No matter what circumstances we encounter, we will break through all difficulties with united hearts, and your loving support and prayers. It is God’s grace and blessing.”

As Brother John explains, many have travelled to China to get food from relatives – but sometimes they’ve gone, or can’t help. “When we give them something, they just start to well up,” he says. “They weep, and they try to say thank you, but we know that some things are not possible to say through words, and we see that on their faces.”

EVERY £37
could provide emergency food, medicine and clothing for a month to a family of Christian refugees fleeing extreme persecution.
my gift today

He often invites people who aren’t yet believers to the safe house, who might be scared of him: North Koreans are taught from a young age that Christians are bad people. Others, like Bae, are already Christians. They are delighted to meet with other believers – and some secret Christians travel to these safe houses specifically to receive biblical training.

“The most important thing for them is to have the opportunity to learn and hear about the Bible as much as possible,” Brother John says. “If they can’t take a Bible back home, I strongly recommend that they recite my favourite verse, Romans 5:8: ‘But God demonstrates his own love for us in this: While we were still sinners, Christ died for us.’”

Can you imagine what a joyful experience it was for Bae to find fellowship at the safe house?

Bae is so used to leading her underground church in whispers, aware that being caught could mean death. In the safe house, that all changed. She sang worship songs and prayed loud prayers. She read the Bible openly with fellow believers, experiencing fellowship in a way that is impossible in North Korea. There are still many risks, but they don’t compare to the ones Bae faces back at home.

"If you don’t support us, we cannot go and minister – thank you" Brother John, Open Doors fieldworker

You wouldn’t blame Bae if she praised God for her lucky escape and never looked back. But amazingly, when offered the chance to stay in the safe house, she refused.

Instead, Bae returned home with the food and medicine she’d be given, and a precious Bible. She shared all these with her underground group of believers. These gifts will sustain the faith of these North Korean Christians for years.

And when believers like Bae know you’re praying for them, it makes an enormous difference. It gives North Korean believers the resources, faith and courage to continue.

The vision of the church in North Korea isn’t just to survive – it’s to survive, strengthen, equip and go. Open Doors stands alongside our courageous brothers and sisters – through safe houses in China and through prayer. Your prayers and gifts are sustaining an amazing 60,000 North Korean believers with food and urgent medical help, through Open Doors’ secret networks in China. Without your help, many thousands of Christians would die.

“Our distribution projects, providing food and medicines for North Korean Christians, have been very significant in supporting their survival during this desperate situation in North Korea, and we have increased the amount we are providing,” says Brother Simon, another Open Doors fieldworker. “Even during such difficult times, God continues to show us His faithfulness.”

Your ongoing praying and giving provide vital, long-term support for believers from countries where faith costs the most – not just North Korea, but all the places where Christians face extreme persecution.

“If you don’t support us, we cannot go and minister – thank you,” says Brother John. “You make a team with us when you obey Him. God does not neglect your heart and calling. Thanks to all the supporters who pray and support us from all around the world.”

Courageous Christians like Bae truly know what it means to follow Jesus no matter the cost – and the cost has been enormous to her, though amazingly she considers her suffering ‘a blessing’ (see a letter at the bottom.) But your gifts and prayers are vital for showing believers like Bae that they aren’t forgotten – and ensuring the survival and flourishing of the persecuted church. Today, you can show Bae that she isn’t alone.

A letter from Bae 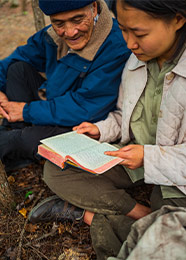 Bae was able to get a letter to an Open Doors partner, thanking Open Doors and supporters like you for their prayers and gifts. We can’t tell you how she got it to us – doing so would put Bae in incredible danger. Please pray for Bae as you read her extraordinary message. (The image is from a reconstruction of Bae's story.)

We are well and peaceful with Father’s grace and your concern.

We give thanks to the Father who is doing almighty works. I am so overwhelmed to write you this letter; we received the greatest love and concern which cannot be returned back. We live firmly in the suffering march, as always.

Whenever I open my eyes in the morning, I feel the presence of our Father. Right now, we only receive materials from you—but we expect the day to come when we can return those back in God.

"We give thanks to the Father who is doing almighty works" Bae, North Korea

From the perspective of other people, our life of suffering must seem like a cursed life; however, this suffering is a blessing from our Father who allowed it in our life because it is a shortcut to the Father. He knows our suffering and listens to our prayers. We thank our Father who has done such great things to prepare life for us.

We, who receive His amazing grace, keenly realise and understand His words: “Man does not live on bread alone, but on every word that comes from the Father.” That means any life that follows His words is blessed.

The thing I give thanks for the most is that Father God uses me to work as his servant. I desire to dedicate my life, until death, to glorify Him.

Brother, I have one request. Please send our gratitude and appreciation to those who sent these support materials to us. I bow to them with a thankful heart.

Bae, your sister in Christ

Brother John shared this prayer – please join with him:

“Thank you to the God who loves North Korea. You are always with the North Korean believers when they suffer. You feel their pain. You comfort them and give them wisdom to survive. You provide their daily bread. God, the North Korean churches have been surviving for a long time. They are relying only on You in their difficulties. Use them to transform North Korea. Let them be a voice to the world and share the gospel to the world. Let us be obedient to God’s calling. As supporters and missionaries, let us be part of God’s ministry. We praise and worship the God who never gives up on North Koreans. Amen.”