Iraq’s prime minister has again encouraged displaced Christians to return to their homes. It’s a positive development, but Christians feel the environment is still not conducive for a safe and prosperous return. As Open Doors’ Hope for the Middle East campaigns enters its sixth year, your prayers and support for the region remain as vital as ever. 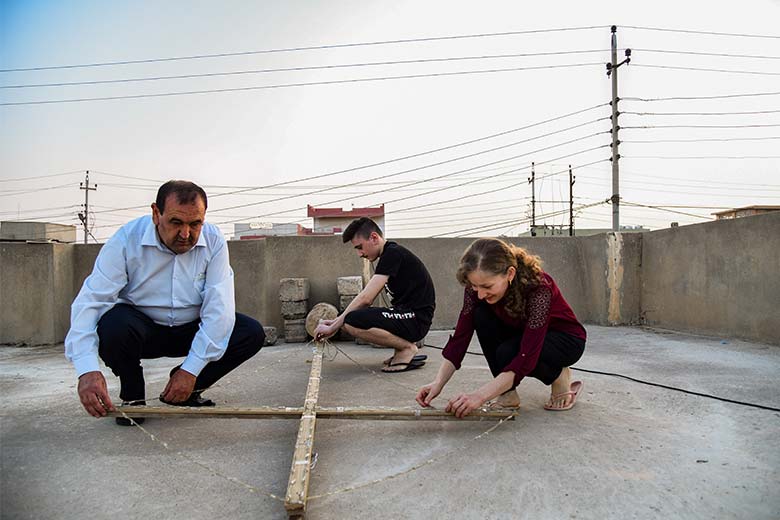 Iraq's displaced Christians are being encouraged to return home, but they feel more action is needed by the government to make this possible

Encouragement from Iraq’s prime minister for displaced Christians to return to their homes has been greeted with frustration and a call for words to be backed with action. Despite the positive gesture, believers feel there is too much danger and too little economic opportunity to make any return possible.

In a meeting earlier this month with church leaders, Prime Minister Mustafa al-Kadhimi ‘called on Christian immigrants and from the rest of the Iraqi sects to return to Iraq, the country of all, stressing that full support will be provided to facilitate this return and stability,’ a statement from his office read.

More needed by government to back up words

Years of war and conflict have driven an estimated 90 per cent of Iraq's Christians out of their homeland. There were approximately 1.5 million believers in the country in the early 1990s. This year, the number is estimated to be at 175,000. The country is number 11 on the World Watch List.

The defeat of so-called Islamic State (IS) in 2017 paved the way for some Christians to return, only for them to be greeted by insecurity and a shortage of jobs and basic services. Some believers returned to find their homes still there, but occupied by strangers. To compound the issue, there are reports of IS and other local militias fighting for control.

"If the government is serious about what it says, it should first start helping Christians who are in the country" Open Doors local partner

“The latest call by the prime minister for Christians to return home to Iraq is a positive gesture since it acknowledges the unique contribution Christians have made over many centuries and the loss that their exodus causes to society,” says Anna Hill, spokesperson for Open Doors' Hope for the Middle East campaign. She stressed, however, that the words needed to be underpinned by action.

“When we began our Hope for the Middle East campaign, we asked Iraqi Christians what they would need in order to stay,” Hill continues. “The things they asked for were legal equality, improved livelihood and a central role for Christians in rebuilding society. The government should therefore work to increase job opportunities, improve infrastructure and guarantee security in order for Christians not only to return but to flourish, making a recognised, positive contribution to society.”

These observations are reflected in the frustration of believers. “Those who live in the country still face several problems and the government did nothing to help Christians who were harmed by so-called Islamic State,” an Open Doors local partner reports. “If the government is serious about what it says, it should first start helping Christians who are in the country.”

The desperate state of the Nineveh Plains – once Iraq’s agricultural hub and the historic home of the country’s Christian community – reinforces believers’ concerns. Issues such as climate change and water shortages, together with mismanagement, corruption and a general lack of government support, have left the area ‘dying’ of neglect.

EVERY £24
could give Bibles to two children to help them grow in faith.
MY GIFT TODAY

Meanwhile, the government has been unable to fully pay farmers for crops it’s bought. “The high cost of cultivation, all put on the shoulders of the farmers, reduces production and income,” the Open Doors local partner continues. “And because of other products entering Iraq from neighbouring countries, many farmers have abandoned farming and resort to other jobs.”

“We have a proverb that says 'two blows on the head hurt',” one resident of Qaraqosh told Aljazeera, explaining how conflict and the poor economy have combined to drive Christians from the country. “It means a human can deal with one challenge, but two problems become hard to take. Therefore, a lot of Christians migrated from Iraq especially after IS took over our towns and villages because they became hopeless to get recovered from these scenarios.”

These issues further highlight the need for your continuing prayers and support for our brothers and sisters in Iraq and across the Middle East. In the five years since our Hope for the Middle East campaign began, you’ve come alongside your persecuted family to bring hope in areas such as education, rebuilding programmes, emergency aid and spiritual support. But much more still needs to be done, making your support as vital as ever.

You can support the persecuted church in the Middle East with your gift.