The Supreme Court in Iran has ordered the retrial of nine Christian converts that could see them released from prison, after ruling that the ‘promotion of Christianity and the formation of a house church is not criminalised in law’. This is amazing news – please pray that justice will be done as a result for these nine imprisoned believers, and for all Christian prisoners of conscience in Iran.

In an amazing turnaround, Iran has decided that belonging to a house church does not make Christians ‘enemies of the state’.

The country’s Supreme Court has ruled that nine Christian converts serving five-year prison sentences for going to house churches should not have been charged with ‘acting against national security’, a charge that is often made against believers in court cases.

"It will give thousands of others across Iran hope that they may now be able to worship together in their homes without fear of imprisonment" Mansour Borji, Article18

Mansour Borji, an Open Doors partner and Article18's advocacy director, says the judgement has the potential to become a landmark ruling: “We welcome this ruling from the highest court in the land. The Supreme Court’s ruling should now pave the way for the release of the nine Christians following a retrial at a Revolutionary Court.

“Even more importantly, it will give the Christians – and thousands of others across Iran – hope that they may now be able to worship together in their homes without fear of imprisonment.”

The Supreme Court’s decision, handed down on 3 November – but only communicated to the Christians’ lawyers on 24 November – states explicitly that their involvement in house churches and even the propagation of what is referred to as the ‘Evangelical Zionist sect’ should not be deemed as against national security.

Believers arrested in 2019 for ‘acting against national security’ 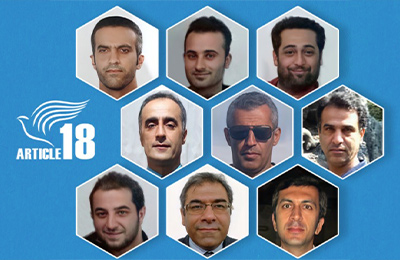 Nine months later, in October, they were each handed a five-year prison sentence on charges of ‘acting against national security through promoting Christian Zionism’. They appealed their sentences but with no success.

While Iran’s legal system does not allow for a court precedent to be set, the judgement could influence cases against Persian-speaking Christians.

More than 20 Christians are currently jailed in Iran for their involvement in house churches. In all cases, the charges amounted to ‘actions against national security’.

“The formation of a house church is not criminalised in law”

The Supreme Court’s ruling states that: “Merely preaching Christianity, and promoting the ‘Evangelical Zionist sect’, both of which apparently means propagating Christianity through family gatherings [house churches] is not a manifestation of gathering and collusion to disrupt the security of the country, whether internally or externally.”

It adds that the ‘formation of these societies and groups is not [a breach of] Articles 498 and 499 of the Islamic Penal Code, or other criminal laws’. This is significant because these same articles, which relate to membership or organisation of ‘anti-state groups’, were used in the convictions of each one of Iran’s Christian prisoners of conscience.

The ruling further states: “The promotion of Christianity and the formation of a house church is not criminalised in law.”

Open Doors and Article18 are continuing to call for clarification from the Iranian authorities of where believers can worship without fear of arrest and imprisonment.

Mansour said: “We further call for Persian-speaking Christians to be provided with a specific place of worship, as is their right under both Iran’s constitution and the international covenants to which Iran is a signatory, without reservation.”

While this is incredibly welcome news, there is still very little freedom of religion or belief in Iran. The country is currently number 8 on the Open Doors World Watch List, and the Iranian government sees the conversion of Muslims to Christianity as an attempt by Western countries to undermine the Islamic rule of Iran. Please continue to stand with our persecuted church family in Iran in prayer.

Another way you can stand with your church family in Iran is to invite your MP to the launch of the 2022 World Watch List launch on the 19 January. At the launch, they will hear first-hand accounts of persecution from around the world and be equipped to advocate for freedom of religion or belief on behalf of persecuted Christians.